Now this is a good idea. What better way to while away a few hours than in the company of Vampirella?

Originally created in 1996 by a New Zealander (J. Bickers, I believe), a set of Vampirella based playing cards.

Ace to King of Hearts, Spades, Diamonds and Clubs plus a couple of "blank" cards to be used as spares or as a Joker.

I have tried to find the creator of this set to no avail. I don't know if they were actually made as a set, or if they only came as a large sheet to cut up and create yourself. If anyone can give me some more info on this item please contact me.

Paul Jaworski has produced some playing card designs, though not all the images are of Vampirella - but she's in there alongside Lara Croft, Poison Ivy, Seven Of Nine, Red Sonja and a whole bunch of other comic book heroines.

He described them on eBay as...

Playing Cards - limited color print - can be SIGNED if You wish - 8.5 by 11 inches on photo paper. There are no backs - just faces of the cards! I will not recommend to cut them out and play - print is not varnished!

More of a gimmick than a real set of cards. 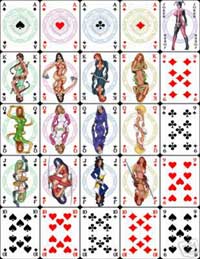 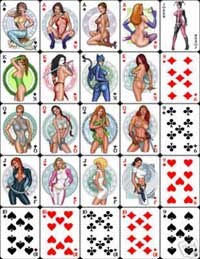 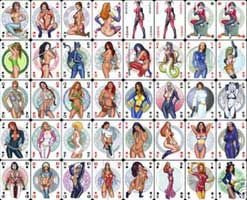