Many years ago Apple computers had a nifty electronic postcard system on their web site. You could choose a picture of the latest Apple computer or promotional poster and email your friend with a very tasteful postcard.

Harris Publishing had a similar system on their web site, but it wasn't long before it got a bit flaky and eventually stopped working altogether.

I missed both of these e-card systems. I didn't use them often but they were a bit of fun when I did. The Apple e-card in particular was ideal for sending late Christmas Cards!

So I decided that I would try and replicate the Harris Vampirella e-card system. That was back in 2006. The code was in PHP which I am not that good at (I can work out what's going on and grind my way through the code until I find the bit I think is doing what I think it's doing…) and I worked out how to insert my own pictures but it still wouldn't work right, and I eventually put it on the back burner and forgot about it.

Christmas 2012 and my son, Adam, was visiting for a few days. He lives several hundred miles away so I don't get to see him that often. I was bemoaning the fact that Unreal Tournament 2004 won't work on my newly purchased Intel based iMac. Though I am very impressed with the iMac, I have been playing UT since 1999, have many friends online and I was a bit gutted that I may have to move on to another game.

"Let me have a look" he said. Ten minutes later, after having a dig around in the code, UT 2004 is working perfectly on my iMac. As a software developer this is what he does every day.

The next day I asked him if he could take a look at my e-card programme. Again, after a few minutes the code was working perfectly (it seems that my temp folder was in the wrong place…).

So, thanks to Adam, if you want to enjoy a bit of retro e-card action click on the example post card image below and send a picture of Vampirella to your friends. 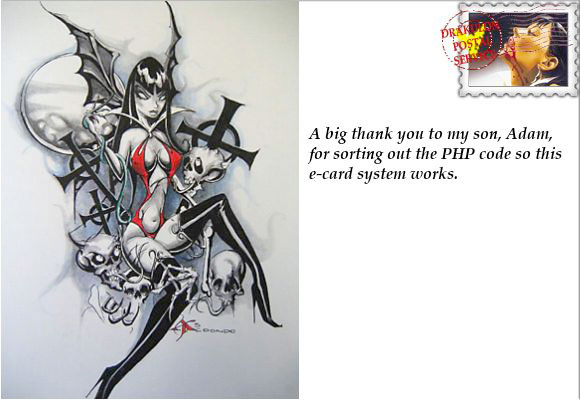