Slipping into the trademark red and gold costume, Alexxus posed as the iconic vamp for photographer Steven Parke. Her Vampirella cover appeared in April 2004, complete with a full fledged interview and photo profile inside.

Alexxus leapt at the chance to portray Vampirella as she has been a fan since the ripe age of 9!

Born on April 18, 1982, as Kristin Marie Young, Alexxus was transplanted from her L. A. birthplace to an Arkansas horse ranch.

"I'm Native American, a Cherokee. It's in my blood to blend within an animal environment. I sheltered dogs, frogs, ducks, birds and cats. Not to mention the horses! I love them all."

A couple of Star Trek conventions prompted her to become a self-professed sci-fi nerd. Alexxus admits that her photo shoots explore her genre fantasies. Her favourite films include Legend, Blade Runner, The Matrix and Conan the Barbarian. Another favourite is Princess Mononoke: the title character's amazing determination and spirit qualifies her as a role model.

Alexxus made her film debut in Arachnia, a hybrid of Tarantula and Night of the Living Dead, as Kelly, a party girl who is afraid of the dark and spiders. Since then she has also acted in Chainsaw Sally, Two Front Teeth and Hallows Point.

During her leisure time, Alexxus is expanding the frontiers of her own comic book, Amera Galpha: Intergalactic Superheroes. "I've created three galaxies that are inhabited by seven to ten different races. The premise is more about theology than technology, and augmenting one's personal psyche into superpowers."

I certainly hope we get to see Alexxus back in the red and gold as she has both the figure and face of Vampirella. 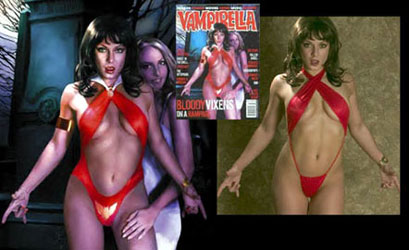 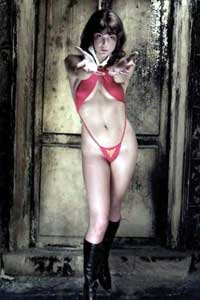 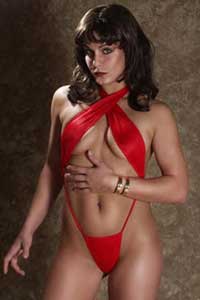 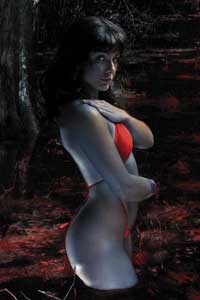