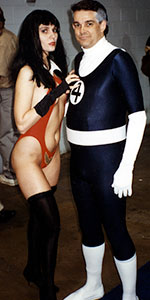 
Leslie is a bit of an unusual model. Initially, purely a Sci-Fi fan (Doctor Who in particular), at the age of 12 she attended her first Convention and a legend was born. Apart from her fascination for the whole Sci-Fi /comic book scene, Leslie discovered costumes!

"With the help of Shane, my then boyfriend, I began to dress as Vampirella, Taarna from Heavy Metal, Elektra Assassin and many, many others. People would take pictures of me in the costumes and it led to my very first magazine appearances. The Betty Pages, Science Fiction Chronicles, Locus as well as ads for Sci-fi and Comic Book Conventions."

Over the next few years Live Action Role-Playing dominated her life, and then in the late 1990's she left Georgia and started a professional career.

Over the years Leslie has probably been the longest lasting Vampirella model, almost as famous at the conventions as the official artists and models. As such there is a huge number of photos of her, and I have added a selection below spanning most of her Vampirella career.

The hardest part was deciding which photos to leave out ...