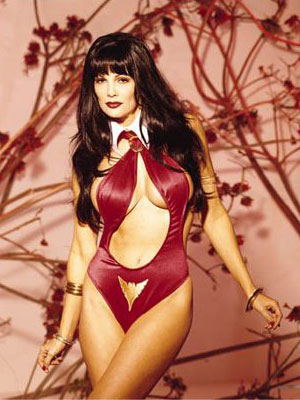 Model, actress and just about anything else you can think of, Julie Strain is a one woman industry!

From the age of 28 she has been merchandised on everything from a Zippo lighter to an interactive CD-ROM. Carefully orchestrated and planned, originally by Julie, but now by Julie in tandem with her husband, publisher, producer and co-creator of the Teenage Mutant Ninja Turtles, Kevin Eastman. Together, they have made Julie the "Queen of All Media".

As a genuine cult heroine, her series of action/adventure and fantasy films have earned her a huge fan base. Julie has been featured on television, in music videos and she is found on calendars, posters, greeting cards, coffee mugs, dolls, watches and countless trading cards.

Her various skills include martial arts, weaponry, singing, race cars, motorcycles, horsemanship, jet skiing, bodybuilding,baseball, basketball, volleyball, water skiing, modern dance, roller skating, track & field, and cycling. All in all, an impressive career for a woman who had to sleep in her truck when she first arrived in Hollywood and who admits to being a "painfully thin, ugly duckling" in high school. It is a wonder that she has time to fit everything in!

One thing she did fit in, though, was quite a few covers for the Vampirella Monthly series.

Harris Publishing knew they were on to a hot item with Julie, and they even gave her her own Julie Strain Special comic book, featured her heavily on the Vampirella web site and modeled a Vampirella Action Figure on her! 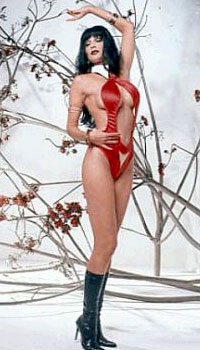 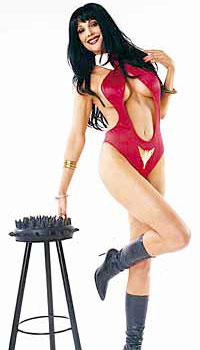 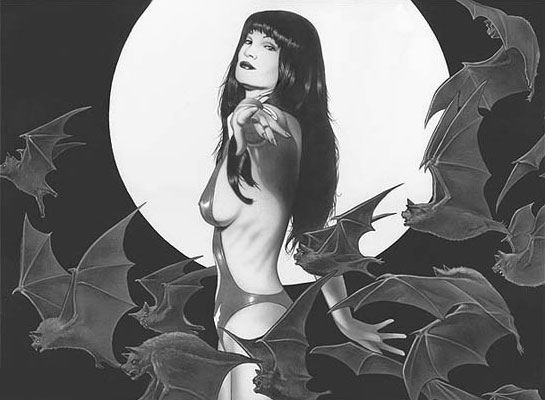