Heidi Saha is a rather "contentious" Vampirella model - by today's standards, anyway.

At 14 years of age she is undoubtedly the youngest Vampirella model to wear the costume in public.

There would certainly be some raised eyebrows if a girl of her tender years wore such a skimpy outfit in public today! Perhaps the early 1970's were more innocent times.

Born on the 30th January 1959, Heidi was the daughter of Art Saha, a well known science fiction editor.

As Art Saha was a President of the New York Science Fiction Society and President of First Fandom it is no surprise that she should accompany him to the 1973 Comic Art Convention.

What may be a surprise is that she attended wearing a Vampirella outfit (as did Angelique Trouvere), and the photo on the right is from an article on the convention in Warren's Vampirella #29 [November 1973].

The photographs of Heidi at the the convention were taken by Angelique Trouvere and Mark Leubker, an 18 year old attendee of the Comic Book Convention and show.

Mark says of one of his photos (shown on the right) "This pic was taken while waiting for an elevator up to the mezzanine level. You have to credit the girl's courage, walking around a convention full of comic fans in such a minute costume, and especially boarding an elevator with a handful of them!"

There are no prizes for guessing who was on the winning podium! History records that Cortlandt Hull’s wonderful Ming the Merciless won first place, the Darkseid costume took second, and Heidi won the last of the three grand prizes for her costume.

(Left) Heidi in the "costume party" room with all the other hopefuls in Fancy Dress competition.

If you click on the picture it will open in a new window and show the whole room with all the other competitors (including the "other" Vampirella, Angelique Trouvere).

What made Heidi's costume win over Angelique Trouvere's? Perhaps it was the fine details, such as the bat shaped "birthmark" on her chest and the bat welded to her right hand! 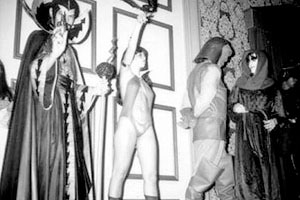 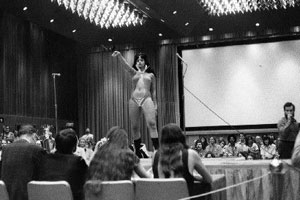 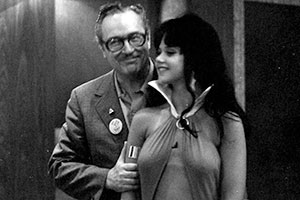 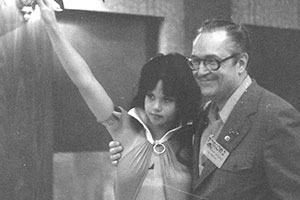 Heidi's next outing was at the 1973 WorldCon - an eclectic mix of annual meeting, exhibition, awards ceremony, opportunity for making publishing deals and "old home week" for some 6,000 Science Fiction fans and professionals. The WorldCon is an opportunity to share ideas, experience, and the love of the fantastic.

Again, Heidi wowed everyone there, including Forrest J. Ackerman (the creator of Vampirella) and other celebrities (including SciFi/Horror author Robert Bloch).

All of the pictures below are from Merv and Helena Binns' personal collection. Two pictures show Heidi standing next to Merv Binns (in the blue Scarab outfit).

Forrest J. Ackerman was so taken with heidi that he published one of the rarest and most sought after Warren magazines - the infamous "Illustrated History of Heidi Saha", a single issue magazine that Warren Publishing released in 1973. Vampirella, Creepy, and Eerie carried large advertisements for the magazine and for a poster with Heidi dressed as Sheena, Queen of the Jungle.

I believe that the magazine and posters were published in all innocence, as a celebration of a pretty young girl whose family connections placed her in the middle of the SciFi/Comic Book set. 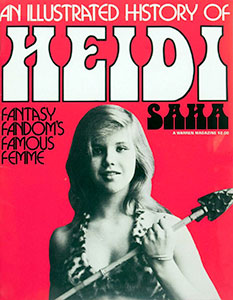 They are now extremely rare.

There are rumours that the magazine was


I believe it was just a limited run that didn't sell well.

Modern myth focuses on the "dubious content" aspect and there are so few people who have seen a copy that it is hard to refute, but I read a quote from someone who has a copy:- "I have paged through the book, and though the logic of its existence may be puzzling, there is NOTHING objectionable contained here. It's a goofy / innocent tribute to some girl that went to conventions dressed as various sci-fi / fantasy characters. There are no colour pics, no Vampirella pics, and NO inappropriate pics in this book. Heidi is seen at conventions with Forry Ackerman, Arthur C Clarke, etc."

Thanks to Angee Trouvere I now have a copy of the "Illustrated History of Heidi Saha", and I have to agree that there is nothing "dubious" in it at all! Not only that, but if I had bought it new back in the 1970's I would have been really disappointed as it really isn't that interesting a magazine. I certainly wouldn't pay the exorbitant prices it fetches now and would have considered it a waste of money at the time. The word "pointless" comes to mind.

I'm sorry, Heidi, but it wasn't one of Jim Warren's best efforts.

After her brief foray into stardom in the early 1970s, Heidi Saha vanished - presumably following the path of many other girls her age ... going to school, getting a job, etc.

Having been in contact with a number of people who knew Heidi and her family at the time (and since), I can understand her wish to avoid publicity.

If you are out there, Heidi, and get to read this page I would love to hear from you with any other comments, corrections, pictures etc. 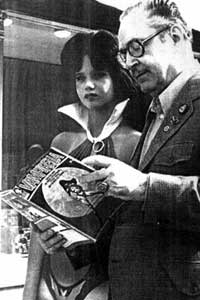 Mike Grace (Vampirella Revealed) has a little more to add to the tale:-

"For some years I heard nothing more on Heidi, then in March 2001 someone called Gentleman John e-mailed me with information explaining Heidi was now an artist having modeled for science fiction book covers earlier, and that she had known many of the science fiction greats such as Isaac Asimov.

Then, in February 2003 Deirdre Perez (nee Boardman) e-mailed me to tell me her mother, Perdita Boardman, was the designer and creator of the costume and bat Heidi wore in the photo above. Her mother always loved the bat the most, and was disappointed never to see it again until Deirdre stumbled onto my web site."

Angelique Trouvere, in an interview with Richard Arndt, provides a very personal insight. 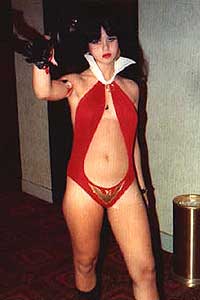 "Anyway, as we wandered into the area where the masquerade entrants awaited the start of the show, my friends pointed out the other Vampirella to me. Heidi Saha was tall and very pretty—her baby face sported blue eye shadow and lipstick red lips. As she peered out from under the long black bangs of her wig she reminded me of a beautiful doll.

"Someone told me that she was 14 years old and I remember thinking how young she was and that she must be rich because her bat wing earrings were gold, as were her armband and bracelets. Her boots were an exact replica from the famous 6-foot tall Jose Gonzales poster.

"It was a well-made and detail oriented costume that knocked my socks off.

"I made my earrings out of cardboard that I'd sprayed with gold paint and attached to ear clips. Then I'd jury-rigged the rest of the accessories with other cheap materials. Sadly, my boots were totally wrong: black vinyl with chunky heels but it was what I was able to afford at the time. (insert sad violin music here...)

"My costume was made from a stretch satin that my friend Stephanie and I worked on to fit within an inch of its life. Stephanie was a great help with the fittings of such a dicey costume and together we figured that since Vampi's costume looked shiny and was curve fitting in the comics and poster, than that's what we should aim for.

"Heidi's costume was made of polyester and cut like a swimsuit but it still looked great. She even had a paper-mache bat! I love attention to details! Man! I would've loved to have a paper-mache bat...

"Speaking of the paper-mache bat, I spoke with a very nice lady named Perdita Boardman, who confirmed that she actually made Heidi's Vampirella outfit from the bat to the boots, with the exception of the jewelry. Perdita and John Boardman were great friends of Art Saha, Heidi's father and Perdita readily agreed to use her considerable costume skills to recreate the Vampi costume when Heidi's mother, Taimi asked her for help.

"I believe that Heidi's parents had Perdita make the costume because they needed a professional looking outfit for the promotions that Jim Warren wanted to set up. Perdita was not aware of this aspect and considered her work on the costume as a favour to a friend. Heidi's mom was very proud of the fact that she made all of Heidi's costumes herself but, in this case, her skills weren't good enough for Warren's demands for complete perfection, which was a trademark of his.

"By the way, I heard that Heidi sold the costume at an auction house a few years ago — I wonder if that's true and how much it sold for?"

It wasn't all fun and games for Heidi.
Click here for a different perspective.