Technically, Caroline Munro should not be here. She never actually donned the red and gold Vampirella uniform, but came very close, though!

Caroline Munro (born January 16, 1950 in Windsor, Berkshire) is a British actress and model best known for her many appearances in science fiction and action films of the 1970s and 1980s.

Initially she was involved in modeling - her first job being for Vogue Magazine at the age of 17. She moved to London to pursue the top modeling jobs and became a major cover girl for fashion and television adverts while there.

Small bit parts came her way in films such as Casino Royale and Where's Jack? One of her many photo adverts got her a screen test and a one-year contract at Paramount.

1969 was a very good year for Caroline, because it was then that she began a lucrative ten year relationship with Lamb's Navy Rum.

At that time I was just starting to go into bars with my mates, and my tipple of choice was (and still is) Lambs Navy Rum and coke. It just goes to show that advertising does work sometimes!

Caroline's image was plastered all over the country, and this would eventually lead to her getting a string of roles in various Hammer Horror films, and the James Bond film The Spy Who Loved Me. In this film she has the distinction of being the first woman to be killed by James Bond.

In the early 1970s, Hammer Films were planning to make the Vampirella film. Caroline Munro was flown to Italy to do a photo shoot for the role of Vampirella, but turned it down (Barbara Leigh was eventually chosen for the role).

In an interview on www.horror-wood.com she states:- "During my time with Hammer there was talk of me starring as the lady herself, Vampirella, and there is a publicity shot I did for Hammer films with long black boots, large leather belt, and a small white, tight outfit – very vampy. They produced a script, which was all nudity and not much else, so I did decline the part. Shame about all the nudity because what a great character it would have been to play; kind of like our own Modesty Blaise."

If you ever wondered what Caroline would have looked like in the Vampirella costume then, perhaps, the picture below on the right will give you an idea.

It's one of those "celebrity fake" photos where some judicial use of PhotoShop has turned a thought into reality...

I certainly think she looks the part! 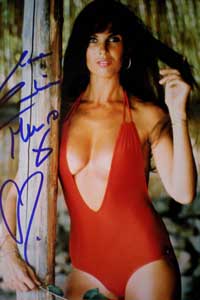 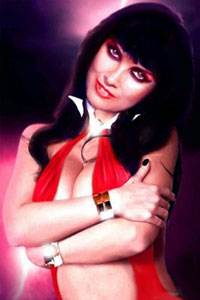