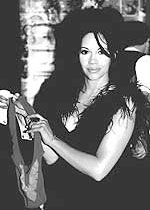 It was inevitable that, sooner or later, Avery Misuraca would don the Vampirella costume.

Since a very early age she has had a fascination for all things of the Horror genre. Early influences were horror characters such as Morticia Addams, Lily Munster and Vampira, as well as the horror-classics with legendary stars Boris Karloff and Vincent Price.

Avery studied acting at Stella Alder in New York City, and has had a number of acting roles. On film she has appeared in Terror Firmer and Vampire Night, and hosted the Hammer Film Festival, which presented the films of Christopher Lee and Peter Cushing.

She has carved a niche as the "spokes-model" for a variety of horror related products including the Coffin Case Company (coffin shaped guitar cases), Spooky Planet (the on-line Internet Halloween store) and Red Widow Clothing.

Recently, she was a celebrity guest along with Alice Cooper and the Misfits at Madison "Scare" Garden.

Better known top the public at large as Countess Vladimira, she has even had comic books written about her persona - Vladimira #1: The Beginning and Vladimira, Blood Relations, which became a regular bimonthly series.

She has also been featured in major publications such as GQ, Premiere, Scream Queens Illustrated and Heavy Metal.

Avery's first Vampirella "appearance"' was as the model for Joe Quesada when he drew the cover for Vengeance of Vampirella #1.

Later, Harris used her for the second annual Vampirella Blood Drive hosted by Comic Book Extravaganza in New York in 1996, where she was invited to the Harris table to sign autographs and take photos with fans.

Avery's next costumed appearance was at the Big Apple Comic Con (New York 1997) as part of a costume contest. She didn't win, but the Vampirella fans loved her.

More information on Avery can be found on her own web site. 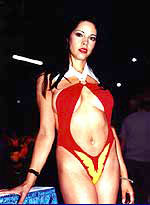 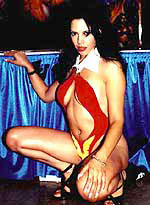 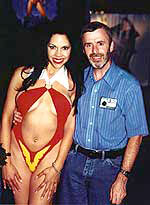 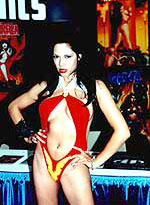 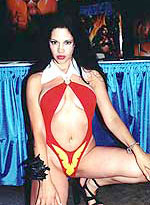 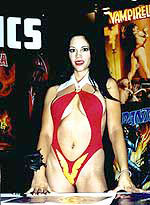 A big Thank You to Glenn Porzig of Megababes for the photos below of Avery with the model for "Ace Of Diamonds". 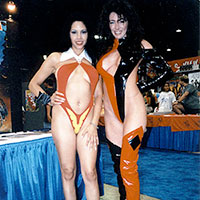 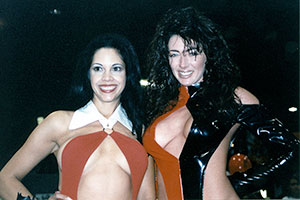