In 2000, Harris Comics decided on a novel approach to picking the latest model to wear the "red and gold", they went public with the selections!

First asking for potential models to send in their resumé, then whittling it down to the top 12, and then running a media campaign on their web site inviting the fans to vote for their favourite(s).

Dealers were sent a Model Search CD with a Quicktime Movie showing the models being photographed and interviewed, and a nice rock music backed promo for the new series. This CD is quite rare as many dealers chucked it away as they could not play it (it was formatted for Apple Mac only and Windows wouldn't run it - so my local dealer happily gave me his copy for free!).

The Vampirella site featured Movies of all the short listed girls, including the eventual winner - Maria Di Angelis. The pictures on the right are taken from Maria's audition, as is the movie clip (2.5 Meg MOV).

You can read all about the contest and the winner in the Vampirella Model Search Special published in September 2001.

Maria Di Angelis - in my humble opinion - was one of the best (if not THE best) Vampirella model ever. The 2000 series of Vampirella Monthly had a model cover for almost every issue, and the combination of Mike Mayhew art and Maria on the cover helped this series become one of Harris Comics' best.

In fact, no other Vampirella model has featured on so many covers (so far!).

Not only did Maria have the right coloured eyes and wore the costume like she had been born into it, but she rapidly became a fan favourite on the strength of her personality. 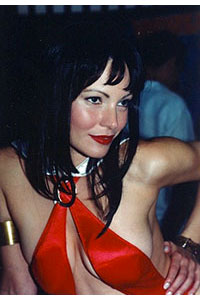 She wowed everyone at comic conventions going just that little bit further to be nice to everyone.

My biggest regret is that she never made it to any UK or European conventions. I would have been first in the queue to get in!

Check out Maria Di Angelis in the Wall Papers section.

One very lucky guy is Terry Sanders who has met Maria on a number of occasions. Below are a few of his personal collection of "candid" shots of Maria.

I think these are wonderful photos as they show her in a much more natural light. As a model, Maria is used to posing for the camera and projecting whatever image is required for the shoot. I believe these photos show her as the person she is when she's "off camera". 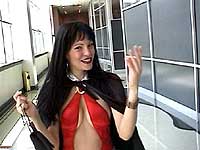 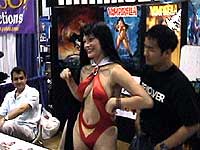 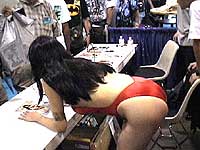 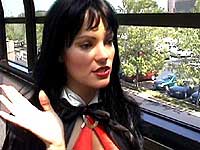 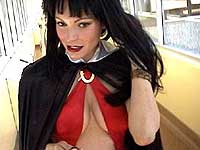 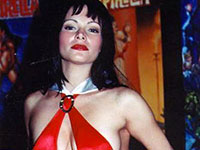 A big Thank You to Glenn Porzig of Megababes for the photos below of Maria with the model for "Ace Of Diamonds". 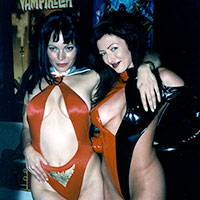 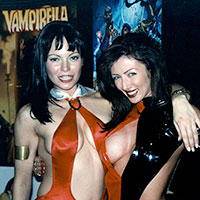 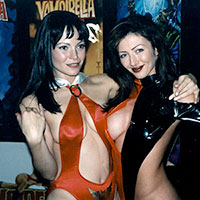 Apart from her short stint as a Vampirella model, Maria has had quite a busy career.

Primarily a model, Maria is reputed to have graced more covers than any model in history, with literally thousands of romance novels' covers.

Also in her resumé are many commercials (both in print and on television), including Revlon, Max Factor, Pond’s, Softsoap, Lever 2000, Levi’s, Chopard, Finesse and Cadillac to name a few.

Recently, Maria has developed her acting career, with roles in Law and Order - Special Victims Unit and Criminal Intent, appearances in the David Letterman shows, and movies such as The Last Request, Atrophy, P.S. I Love You, What Happens In Vegas, Duplicity and I Origins.

Maria appeared on national TV as the “Pantene Girl”, at the 31st Annual People’s Choice Awards in January 2005.

More info on Maria can be found on her own web site. 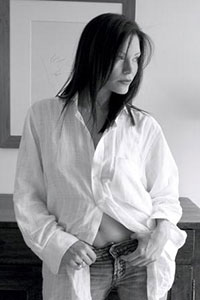 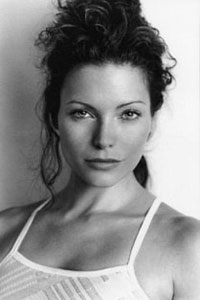