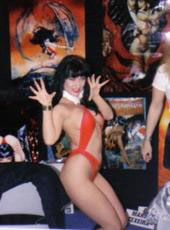 As well as the cover photos, she attended at least one convention in the distinctive red and gold outfit.

I have to say that she looks a lot better in the photos at the convention than those on the comic book covers. Perhaps this is one of those occasions where real life is better than "art".

Research on the unknown model had found a single photo labeled "aimeec" so I assumed that her first name is Aimee. It turned out that I was correct ...

I was contacted by Aimee who confirmed that she was the "unknown model". She wrote "It is great to know that there are true Vampi fans about ... it has definitely been an honour portraying this beauty. I chose to keep my name private for many reasons. 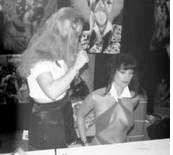 "It was a blast being a part of the Harris group, and I am looking into doing it again soon. I decided to go and become a mommy and a wife and took a bit of time off. But, I'm ready for more!!

"I love Vampirella and the image. Most little girls dream of becoming a ballet dancer, not me ... I wanted to be a beautiful Vampire! Still do!"

All the pictures on this page were supplied by Aimee - thank you.

The other lady with the white top in the pictures is Amanda Conner.

Trivia: Aimee is the only model to wear fangs as part of her photo shoot. Harris (for some reason) didn't want the models portrayed wearing fangs (info courtesy of Mandy O'Toole).

I have seen photos of Aimee as she is today, and have to say that if she did another photo-shoot now she would look as stunning (if not more so) than she did way back when.

I will respect Aimee's desire to remain anonymous, I know she has many good reasons for doing so.