2010 was not a good year for Vampirella. The Harris series Vampirella: The Second Coming came and went without much of a fuss, and eventually Harris sold Vampirella to Dynamite Entertainment. In the ensuing hiatus one model refused to let Vampirella slip into obscurity and did a photo shoot in the classic red and gold outfit. That model was Julia Faire, and the photographer was Dave Mar from DTD Productions.

Ms. Faire thought it would be fun to add some "Campy Vampi" photos to her modeling portfolio.

"I've been a big fan of Vampirella since I was a teenager, “Ms Faire explained. “I am fascinated by her dilemma: being a noble virtuous person who happens to need human blood to survive. I love her solution: only prey on bad people—if only it was that easy in real life!"

Ms. Faire discussed the shoot in great detail with the production team and insisted on a "classic" Vampirella one piece suit rather then a more modern, more revealing thong version of the costume.

"I want to pay homage to Vampi, more than I want to titillate people," Julia said.

Once the suit was selected and sewn, Ms. Faire added her own touches. "The thigh-high go-go boots were my idea." Ms Faire said, "I have a pair of knee high boots, but I thought the higher boot would emphasize the costume more." 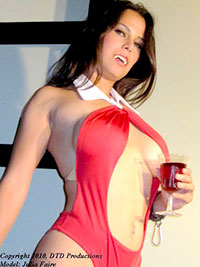 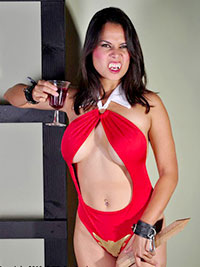 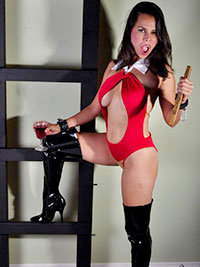 During the photo shoot, Ms. Faire had another brainstorm, "I thought, what about cuffs? Maybe Vampi would wear them to restrain herself until her hunger passes."

To the point, Ms. Faire commented "Once the fangs were applied, I started to channel Vampi, getting into her character. I realized that I was getting thirsty and the wine in my glass would not satiate me! I started looking at the producer and the make-up man as potential "meals" and it dawned on me that if I really wanted to save my friends, I would literally have to restrain myself. Thus the idea to wear the cuffs."

Ms. Faire hopes you enjoy and appreciate her Vampirella tribute and, if the demand is there, may don the red suit for further photo shoots!